While the outlook for some birds at the minute is quite grim one specimens situation looks to be on the up. As conditions continue to be treacherous on the roads staying locally is the best policy so the Rising Sun was again on the agenda yesterday. Not too many birds at first and it was pleasantly quiet overall with the occasional squeal of delight coming from the hill of some sledder, who would have already been full of the joys of winter having been told not to attend school anyway. I got to Swallow Pond to find it 90% frozen with a distinct lack of birds notably ducks. There had been over 200 Widgeon here a couple of days ago. Dozens of Shoveller and scores of Teal but the only 2 ducks present were a couple of farmyard hybrids which came running over the ice from fully 100 metres away when they detected my prescence hoping for some scran. The chill wind was cutting and with some gulls the only other species around i decided it was better keeping on the move. With Swallow now almost totally frozen and recollecting the 5 Water Rail i had in the ditches in similar conditions last year i headed into the plantation but managed only a couple of Blue Tits, half a dozen Blackbirds and a brace of Robins. The lack of people and more specifically dog walkers was more than making up for the lack of birds.
On to Dukes Pond and was more than confused when i found the Mute Swan juveniles had increased from 7 to 8. There was a mini blizzard blowing as i got here so visibilty had dropped considerably and counted again. The cygnets were on the ground, with some tucked up and asleep and it was only after 5 minutes or so i realised that the extra one was the juvenile Whooper that had been hiding in and around the bigger Swallow Pond for the last fortnight or so. Bearing in mind that the Whooper had been hiding in the reeds all this time due to the fact that the male adult Mute had been terrorising it and others and it was with that birds offspring was more than suprising. Initially the bird was on the periphery of the group but as i observered for some time the bird moved into the middle of other swans and even close to the parent birds without any aggression from the adult male. I will be following the progress of the Whooper over the coming days. 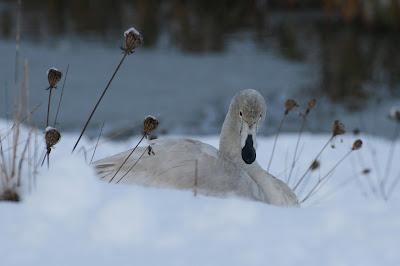 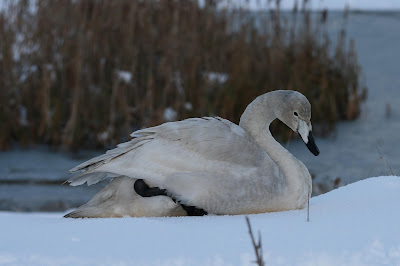 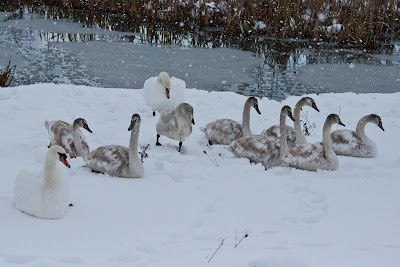 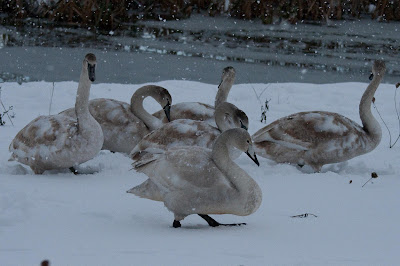 Actually, to be politically correct i should have started with HELLO DUCKY. This elegant bird is a diving duck, with the term Sawbill applied due to the serrated mandibles. The three pictured below were spotted on Killingworths smaller lake. Goosanders are regular visitors to Killingworth at this time of year along with Mergansers. I had a walk around the larger lake also hoping to find an interesting goose in amongst the Canadas and Greylags but with no success. Numbers of waterfowl are increasing with a noticable number of Pochard but surprisingly no Goldeneye yet.
I headed down to the Rising Sun from Killy but it was quite quiet. I called by Dukes Pond first but a dog walker sporting the cackiest khaki strides ever was at the edge of the water with the dog taking a dip and i didn't stay long so obviously didn't see the Jack Snipe that Simon told me that he had lifted from the reedbeds 20 minutes earlier. The large numbers of Redwing amd Fieldfare that frequent the large field by the farm have yet to arrive, but i was more than happy to make do with the Little Owls that adorn the former explosive outhouse nearby. The juvenile Whooper Swan that i mentioned recently is still in and around Swallow Pond. I didn't see it but heard it, this time however it was near the hide on the waggonway. 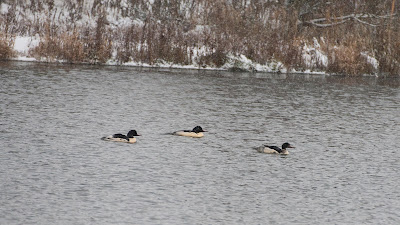 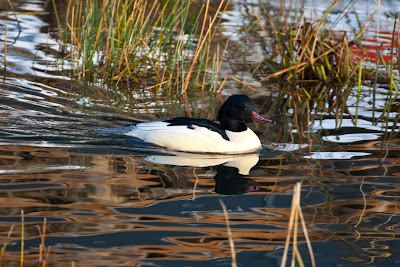 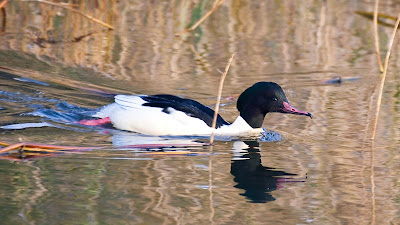 Entering the river, where she was built, for the last time. 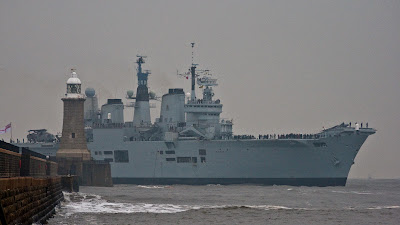 I have frequented the Rising Sun Country Park more often recently, as i always do at this time of the year. I tend give Swallow Pond a bit of a wide berth during the summer months as it gets very busy with the kids being on holiday and the improved weather bringing more visitors in.
The Whooper in question is a juvenile which has been residing in the reed beds on the bank opposite the hide on the waggonway. The bird has been there for over a week, having been terrorised by the resident male Mute Swan who rules over his patch fervently. For the 30 minutes that i sat the Whooper kept peering over the top of the phragmites, stretching its neck like the periscope of a submarine, surveying the scene. It never ventured onto the water however and i presume the main reason it has been there for so long is that it is reluctant to do so which is possibly not allowing it to achieve lift off. I won't be back until next week and will be interested to see if it remains. The Mute Swan has in the past dispatched numerous ducks and geese and one of the locals was telling me he had a pair of juveniles pinned in the south west corner for a few hours on Monday. Numbers of ducks have been increasing on the pond with over 120 Widgeon sighted on Tuesday. Teal, Shoveller, Tufted and Pochard are showing well also. One other species of note, an Otter has also been appearing over the last few weeks occasionally.

My favourite resident of the Rising Sun made an appearance while i sat. I haven't seen him for some time so i was overjoyed when i spotted him. 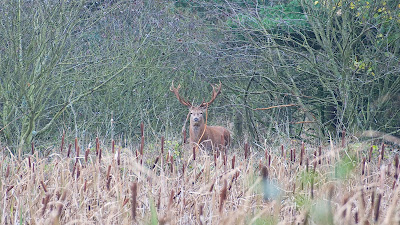 Phwoarrrrr, look at the wattle on that !! 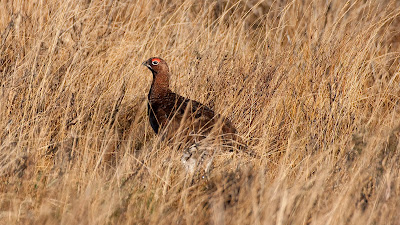 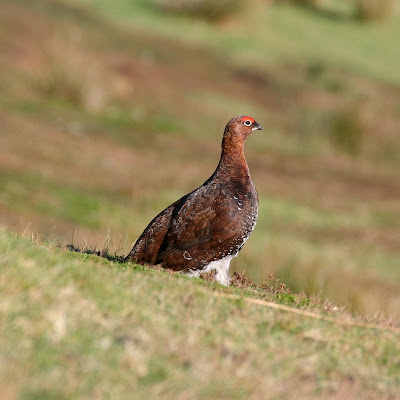 Green Woodpecker on the edge of Guisborough Woods. 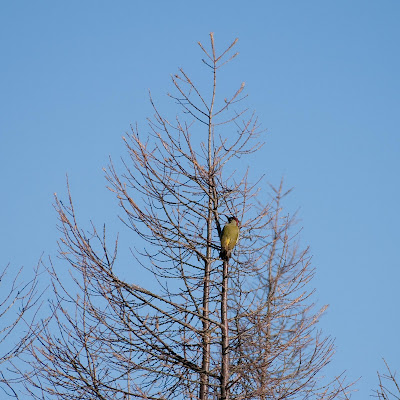 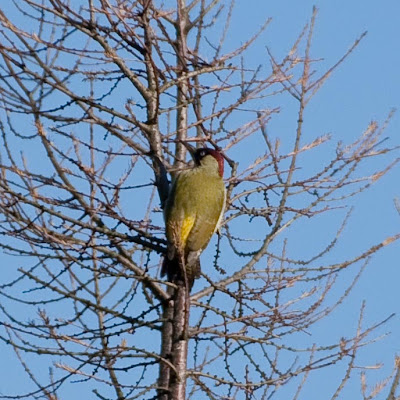 With a good weather forecast i took the trip down to Sleddale that i had cancelled last weekend. I was obviously going to try to view the Rough-legged Buzzards but having seen the area on Memory Map had decided a nice walk would also be on the agenda. Arrived at 8.15a.m. and spent a chilly 30 mins. at "The Chevrons" without any success so decided to park along Percy Cross Rigg and start walking from there. A good craic with a few birders while at The Chevrons, two of whom had been there since just gone 7a.m.
Anyway, in perfect conditions for walking,birding and photography set off  before dropping down to the track that passes Sleddale Farm in the valley. As i walked Red Grouse were rising all around me. I did go possibly 10 minutes one time without seeing any but otherwise they were lifting every couple of minutes. Must have seen over 150 birds while i was there. As i rose up from the valley with Codhill Heights on my left and Gisborough Moor to my right i flirted with the Cleveland Way for a short time. This took me to the edge of Gisborough Woods which i skirted for a few km and as i did so caught a flash of vivid green which rose up into the tree tops. A Green Woodpecker came to rest but as i shuffled closer dropped down to the floor of the woods. Just before i left the edge of the woods to travel along the eastern side of Sleddale i got a quick glimpse of a pair of Bullfinches. Heading in a southerly direction with Gisborough Moor now on my right, i proceeded along North Ings Slack crossing Whiteley Beck towards the end just before coming into Commondale. No more birds of note on this section but still Red Grouse lifting all around me.
I was now on the B road heading back to The Chevrons and as i arrived there spotted the two guys from earlier. By now it was 2.30 and all they had seen in that time was a Common Buzzard and a Hen Harrier. So the Rough-legged Buzzards hadn't shown all day and by now there was a gallery of around 20 people with cars littering the roadside on the climb to said Chevrons. It really is a good view along Sleddale. Another 30 mins.and more craic before setting off to finish my walk. In all i covered 14.3km. and ascended 323metres.
A cracking day and if you like to do a bit of walking while birding, highly recommended.
Posted by Johnnykinson at 01:00 4 comments:

Smokeball is an alternative name for the Puffball and if you continue on you will see why. It is a common fungi occuring on the ground in deciduous woods. What you actually see is the fruitbody and these specimens that i found were on the side of the pit spoil heap of the former Rising Sun in a wooded area that overlooks the country park. I actually discovered these fungi months ago but they were finished for the season so i made a mental note of their location and was more the happy to rediscover them.
The first image shows a young fruitbody. It is covered in "jewels" and whitish in colour. 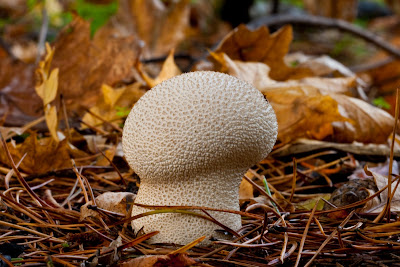 In image two you can see that the Puffball has matured. The colouration having gone from whitish to cream to brown. You can see the apical pores from which the spores are dispersed. 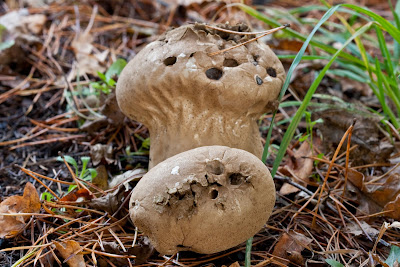 Image three and i have caused the specimen to disperse the spores in a smoke like cloud. I actually tapped the body with a small branch a couple of times taking care not to breath in the spores as it can cause lung disease. 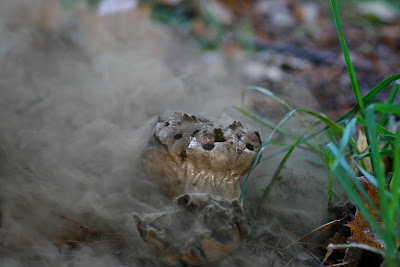 In causing the fungi to EXPLODE i hopefully helped it to spread further afield.
The last image shows the fibrous inside after expulsion.. 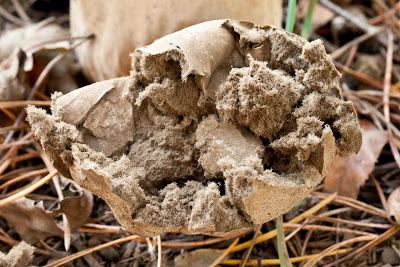 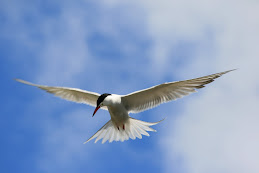 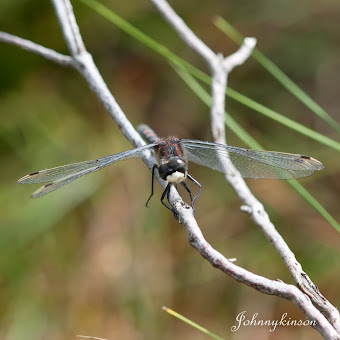 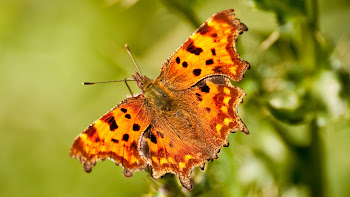 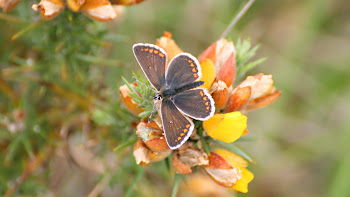